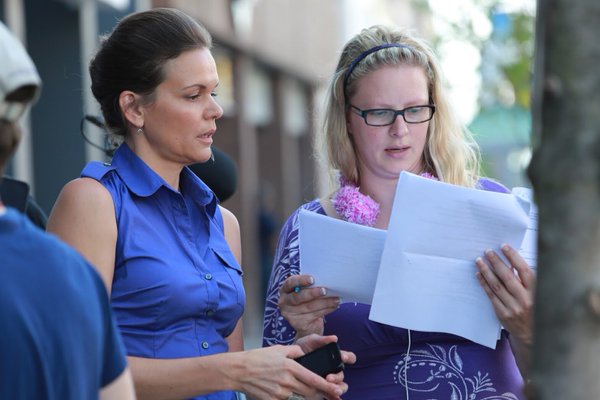 Posted by admin on August 12

This year has been life-changing.  I’d like to share as much as I can, but I would have to write a book – fortunately, I have been writing one.  This time last year I encountered a producer I had been working with on another film a few years before.  I met with his new producer partner because I believed he was interested in reviving the project or looking at other projects, but that was not the case.  At least he wasn’t interested in having me attached to any of my projects.  It was then that I knew I wanted to produce my own film, not to sell a script.

At that point, I had just started writing the script for what would later become Masters of Romance and while I believed I would produce it, I had no idea if I was going to be able to deliver.  I had produced a play and several short films before, but every time I had attempted to produce something bigger, there were problems.  I decided this time I was only going to make this film if it was going to be the easiest, most fun thing I’ve ever done and it has been.

I wrote the script in six days.  I rewrote it in 12 days.  It took 6 months to lock in cast, 2 months to secure crew and we shot it in 6 days (plus 2 days of second unit inserts).  Two days before we started shooting I had no money to pay for anything.  None.  Our GoFundMe campaign had launched in April, but due to several internal delays we were late in promoting it.  Miraculously we received the funds we needed to scrape by all the way through to the end of production.

Being an ACTRA member certainly helped because it immediately raised the bar on quality of performance.  And I struck gold.  Not only did I cast talented and hilarious actors, but the chemistry between us is palpable.

I wasn’t going to make this film if it wasn’t going to be right, but I also was flexible enough to let it take shape on its own.  It seems strange to say this, but it’s like the film knew what I wanted it to be and it naturally became that.  The wrong people filtered out while the right people entered in.  I can honestly say that what happened on this film is nothing short of magical.

This was the best crew I have ever had the pleasure of working with.  They’re fun to be around, easy-going and passionate about what they do.  As a bonus, they believed in what we were creating.  When we encountered tough moments, we found a way to ease our way through them.

Four days to starting principal photography, our Cinematographer canceled on the first day of shooting for a paid gig.  When everyone is working for deferred pay, make sure they are doing it for the right reasons.  I kept the project small and tight for this very reason.  The longer the shooting schedule, the more likely you are to have people cancel.

My Production Manager, Crystal and I sat in our production office, so generously provided by Core21, laughing.  We knew this was the universe’s way of bringing us someone better-suited to our film.  Crystal posted on Instagram “Looking for a Cinematographer, send us an angel.”

I was waiting to hear back from a viable prospect when Crystal texted me, “Our designer emailed to say her husband is a cinematographer and he has to do this film!”  “Let’s see what happens with this other guy first,” I replied, but we both knew this was our guy.

The next day I was on the phone with Francesco telling him about the project.  “I normally look for reasons why I shouldn’t do a project and I can’t find one,” he said.  “I can’t stop thinking about it.  I feel compelled to do this.”  Compelled.  Yes, the universe was definitely sending us and angel.

Things like this kept happening whenever we encountered what appeared to be a problem because we would see the gold in it.  Rather than push against it, we embraced it knowing there was a higher purpose in it; and there was every time.

The entire shoot was the most fun thing I have ever done.  When it was done, I crashed hard.  The speed of the momentum that had gathered was so fast that entering post production was like hitting a brick wall.  I had to switch gears.  As a director/producer/writer and actress I had to switch gears so often it was sometimes trying.  Staying in the moment as an actress while you’re thinking about directing isn’t easy, but I loved the experience and would do it again in a heartbeat.

I think the best thing a filmmaker can do at this level is hire people who know what they’re doing and make sure they do their jobs so you can focus on what’s important.  Little things you never think you’ll have to consider on set like dealing with lunch or worrying about whether or not your mic pack was showing.

Also, give your team two to three months to prepare.  I had two, but I was so busy dealing with marketing, fundraising and training my team that I would have liked more time to focus purely on directing and acting.  But doing multiple jobs is part of the fun and I don’t think I would have done anything differently had I had more time to prepare.

The best thing would be to have the funds before making the film, but it worked out for me so there’s no set rule, it just makes things a bit harder.  I went ahead because I knew everything was going to work out and I knew that people would be more likely to support a film that was in motion than one that might not happen.

I’m currently in post-production and the magic continues.  The more I watch, the more I know there’s something really special here.  I could easily live in the world of Masters of Romance.  It’s more than just a love story; it’s a place that exists and simultaneously doesn’t exist.  It’s a memory and a projection.  Living in my film life feels like it’s overflowing with love and joy.  It’s both a story about a place and a life I would like to live and one I would rather leave behind.

Making Masters of Romance has easily been the best experience of my life for many reasons.  It’s shown me that you should never set limits on yourself or let anyone else set limits on what you can do.  It’s shown me that you can make a Hollywood-worthy feature film with no money.  It’s shown me how the universe conspires to make the best of things come together for you as long as you get out of the way.  And it’s shown me a glimpse into the magical world I’m moving into: a world in which people come together to support on another to make dreams come true just to be part of something special.  That’s the feeling I’m putting into my films.